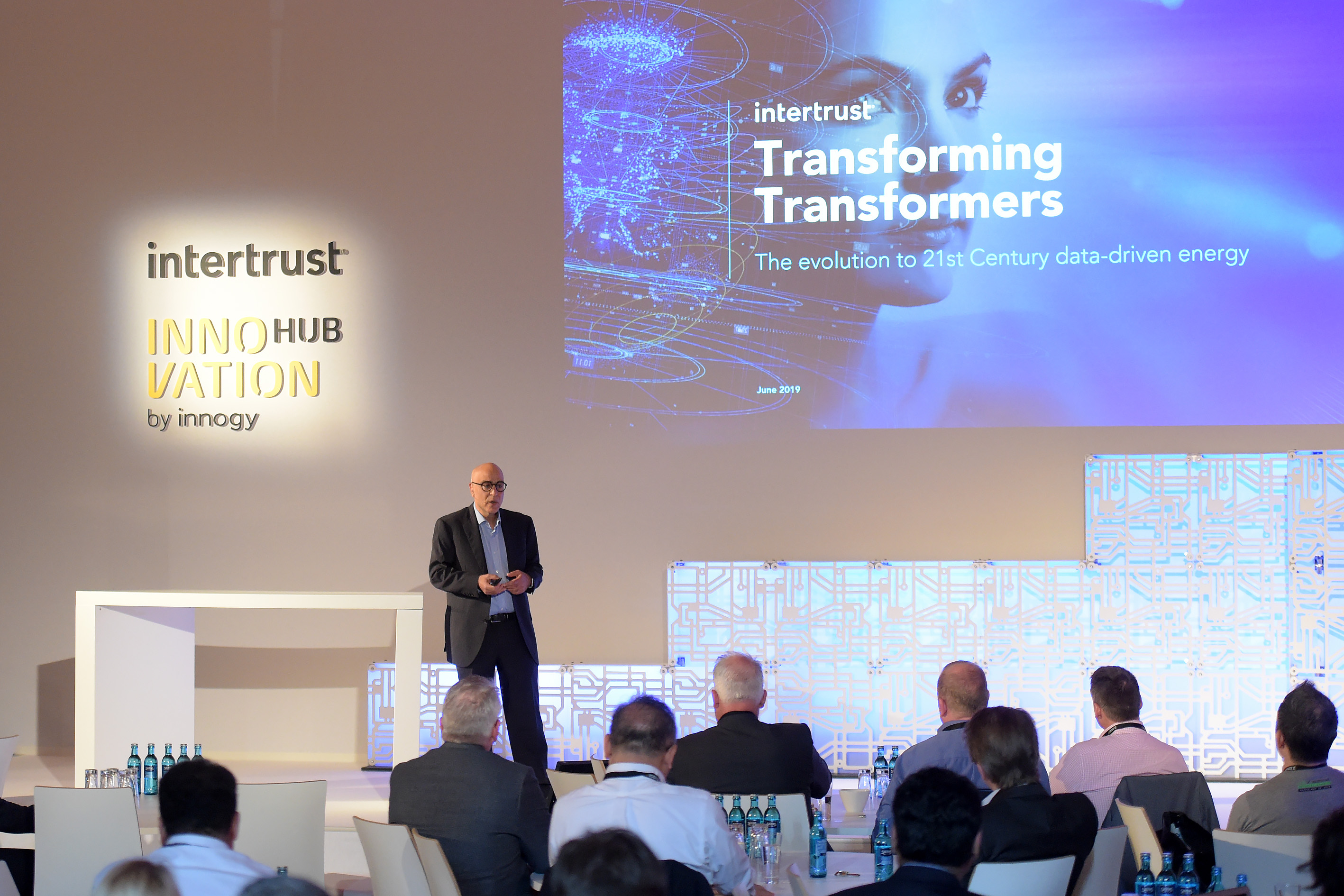 The German energy market has undergone enormous changes in the last ten years. Digitization has become an established fact in every corner of the market. During this transitional phase, energy providers have been forced to seek radically new business models.

Transforming Transformers 2019 (TT19) was a series of events laid on by the California company intertrust, allowing top managers from different economic sectors to discuss future trends and product implementation with IT industry representatives. TT19 was a collaborative event between intertrust and the innogy Innovation Hub, bringing 150 leading energy industry executives to Düsseldorf for the event.

Old met new as the inspiranten team completely re-modelled the historic Rheinterrasse location, so as to reflect the themes of transformation and connectivity in the venue design. Changing back-lighting illuminated connections on stage during the day.

The stage was divided in two, with a speakers’ zone on one side and a dialogue forum on the other. This allowed the focus of events to shift as necessary between presentations and podium discussions. Events began with a discussion of the future of energy and mobility in a digital, data-driven industry, followed by panels on investment, entrepreneurship and data-driven renewable energy. Discussion got off to a great start with presentations from Talal Shamoon, the CEO of intertrust, and Thomas Birr, CEO of the innogy Innovation Hub and senior vice-president of Innovation & Business Transformation of innogy SE. The discussion panel featured more CEOs, including Frank Calabria from the Australian energy supplier Origin and his counterpart at Germany’s E.ON, Johannes Teyssen. They were joined by other top executives and major founders from the international energy business: Cameron Briggs (Future Energy), Heriberto Diarte (Schneider Electric), Thomas Leurent (Akselos), Peter Mathis (DigiKoo), Amit Narayan (Autogrid), Toni Lucas (Origin) and Tomomichi Seki (Tokyo Electric Power).

Plenty of downtime was built into the schedule, allowing participants to mingle and build their networks. The catering team devised a seating arrangement to encourage private discussions. TT19 finished on delicious food and idyllic surroundings: an informal barbecue on a beautiful summer evening, with participants enjoying magnificent views of the Rhine.

For executives from a range of well-known energy companies, TT19 offered a chance to seriously discuss the industry’s future with their peers. These discussions of paradigm shifts transforming the industry went much further than just information exchange. The event generated authentically innovative ideas. New contacts were made, which have since led to the launch of working pilot projects. The carefully arranged balance between information and dialogue allowed every executive to focus on their most pressing concerns. The compact format was highly praised, and plans are underway to repeat the event in the coming years.